Temple of the Spider God

Cesaro Cortez, a famed explorer-conquistador, set out three years ago on his last great expedition. His ships never returned to an Orlandrian port and he was feared lost until a mysterious cargo appeared recently in Miramar. The nature of this cargo will put Orlandes in jeopardy, sending you on an epic journey to find Cortez, save the country and face your darkest fear!

Taking you to new locales, Temple of the Spider God has you discovering an horrifying spider worshiping cult, with Josh Wright’s full colour illustrations bringing the story to life.

Get Temple of the Spider God instantly for PC, Mac, Linux and Android! (Click here to buy for iPhone and iPad universal instead.) Simply use the Humble Widget below: 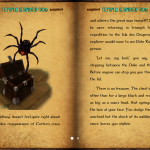 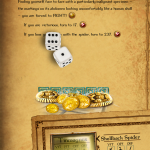 Pocket Gamer Review – “It’s a great modern equivalent to the books many of us loved as youngsters, with the same kind of attention to detail and thrilling fantastical touches that made these adventures so enjoyable.” – 8 out of 10! – SILVER AWARD!

dialaphone Review – “Temple of the Spider God is well-crafted, thrilling and intelligent, with more than enough content and alternative choices to keep you occupied for weeks, and the obvious amount of care and attention invested in its creation makes it an essential purchase for the lone adventurer.”

Check out the other Gamebook Adventures!